As usual when I am away I had a crappy nights sleep. I kept hearing what I assumed to be a mosquito in the room and was imagining myself being eaten to bits. Fortunately that doesn't appear to have been the case as I am bite free this morning.
It appears that everyone is expected to be awake at 7.30am as the local Church rings its bell for quite a while. The day dawned lovely and sunny and I optimistically put on my short jeans, t-shirt and sandles to prepare to enjoy the sun. Unfortunately it is disappearing as I sit in the little garden eating my breakfast and watching the boats go by. 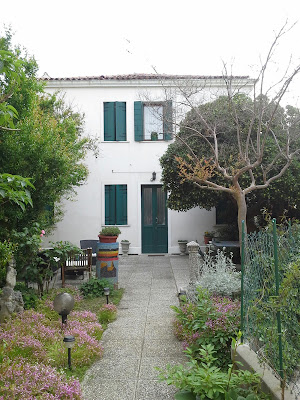 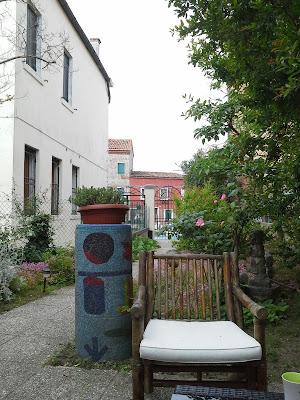 Well no more sitting around I'm off..... more later x
...............
Not a good start to the day, I managed to lock myself out of the b&b lol! Fortunately I had been chatting to another guest who was also doing a class at Davide's so I knew where to go to borrow her keys and had an early introduction to Davide in the process.
Although it is gone 9am there are very few people about, mostly people going to work and shop keepers unloading stock. 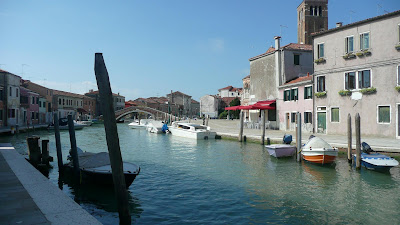 Everything has to be brought in by boat as there are no cars here. I was watching them collecting the rubbish, it is all done in hand carts which are then wheeled to a boat that picks them up and empties them ready to be reused, I have to say the place is very tidy, not a sign of rubbish or graffiti anywhere. Even the water is rubbish free. 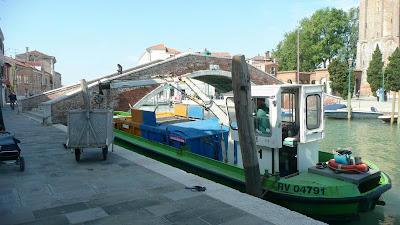 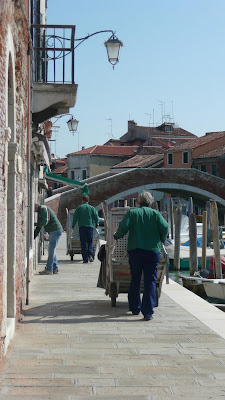 Not a very nice topic but interesting all the same.
My second trip out the door proved unsuccessful too. I was on my way to return the keys I borrowed. Half way there I realised I didn't have my bus pass so had to go back again!
Dropped the keys back and had a lovely chat with Davide and Peyta (from Bulgaria) who was having a beginners class with him. I was welcome to stay and watch him demo but I wanted to be on my way and do some sightseeing. I asked Davide why it was so quiet and he told me that it didn't use to be like this but it had changed because the tours come over later now and sure enough It did get busier, apparently it stays busy until 8pm.
I Found the local supermarket and bought some bananas, ham and cheese for lunch (I took one of the pastries provided for breakfast to make a roll) I got frowned at because I didn't use a plastic glove to pick up my bananas (although why I needed one when they have a skin on I don't know) and I needed help because you have to weigh them and put a sticker on before taking them to a checkout but someone to pity on me and sorted me out.
There are lots and lots of shops selling glass, beads and jewellery, so much inspiration it is a bit mind boggling and I'm sure I will forget most of it when I get home.
I can't quite work out if some of the buildings are deliberately made to look a bit dilapidated for effect or if they really are,  but there are some lovely photo opportunities of peeling paint and crumbling brickwork. 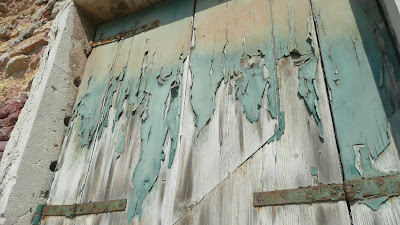 ﻿
There were a couple of glass sculptures that I came across,  it was a shame they had horrible fences around them.

I got onto a water taxi, wasn't really sure were I was going to be honest. I didn't buy a guide book before I left and assumed there would be maps that I could pick up at the airport but there weren't. So I got chatting to the two ladies sitting behind me who also seemed to be unsure of which stop to get off of and they kindly gave me their map the hotel had given them saying they could easily pick up another one.
We worked out between us that we needed to change boats as this one seemed to be going the long way round and got on a boat that was heading to St. Marks Square. By this time I was needing a toilet so I asked a waiter who wasn't busy and he said that there were some by the square. It was then that I spotted some stickers on the floor with WC written on them and an arrow so I followed. I'm sure there must have been a quicker way as they went all round the houses but I found them eventually. You wouldn't want to need them in a hurry especially add they cost €1.50!
I forgot to say that the sun came out again and it was very pleasant wandering around apart from dodging the hoards of people trying to guess which ones are going to stop dead in frog of you to take a photo.
I decided to sit on the steps of St Marks to eat my lunch. I was just trying to figure out how to get the ham open without the aid if a pair of scissors when 2 gestapo came over and said that no one was allowed to sit on the steps and I could go and eat my lunch in the garden specifically for this purpose. 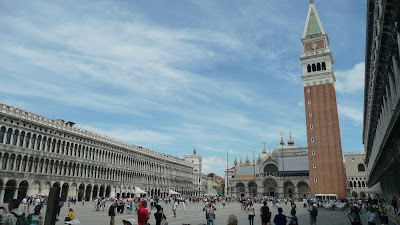 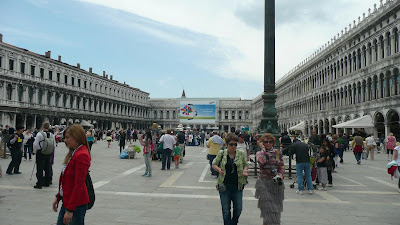 Shame about the big advertising banner at the back!
﻿
I could either go off to the right or left to find it. Fortunately I had passed it on my way to look for the toilet otherwise it wouldn't have been as easy to find as they said! Found a bench and managed to get bitten by a mosquito whilst I was eating my lunch. It was nice to take the weight off for a while.
I then decided to go and see the Rialto Bridge and the Grand Canal. Set off through the maze of alleyways that are full of little shops mostly selling the same thing,  venetian masks and glass as well as the usual tourist tat. I followed the signs but again felt like I was going round in circles until I peared up an alley and there it was. 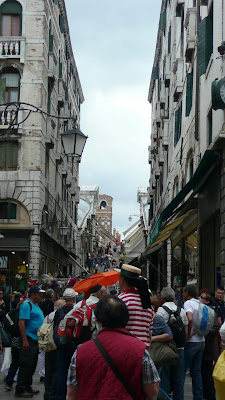 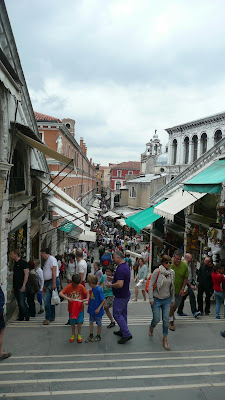 View from the bridge looking back down. 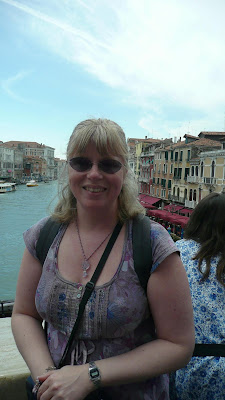 Me on the Rialto Bridge 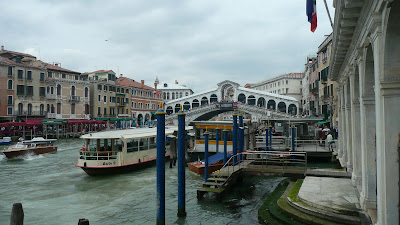 The Rialto Bridge
﻿
Not quite what I expected.  The middle of the bridge is full of shops but you can also walk on either side of it as well. I unfortunately managed to twist my ankle on an uneven step on the way down but no lasting side effects.
Having been on my feet for a few hours I decided to head back to Murano and the b&b for a rest.  Had a nap and am now in sitting in the garden going through my photographs and writing up this blog, listening to Classic FM whilst waiting for Peyta to go out for pizza.
Thanks for looking.
Linda
x 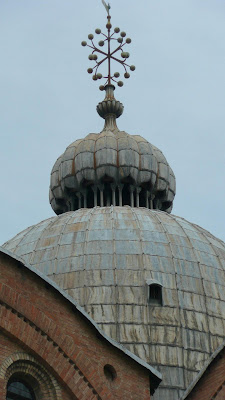 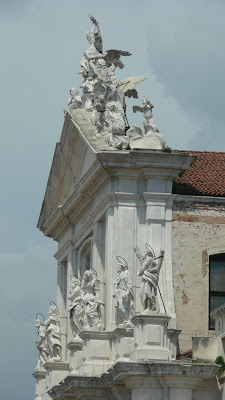 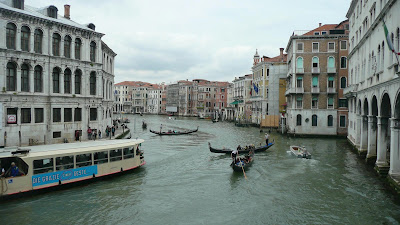 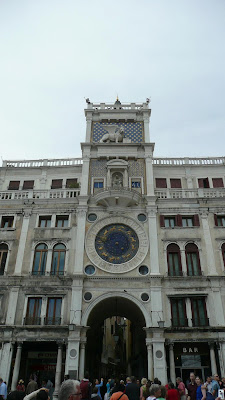 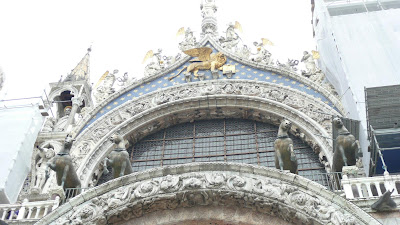 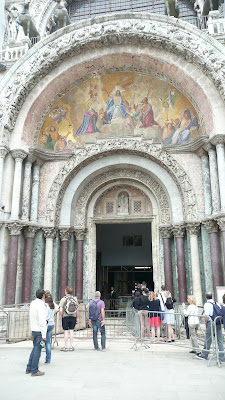 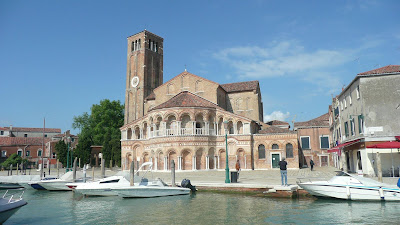 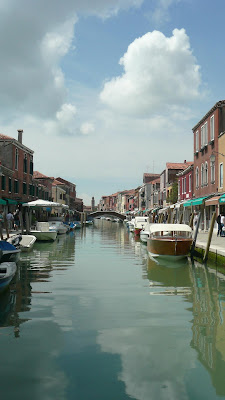 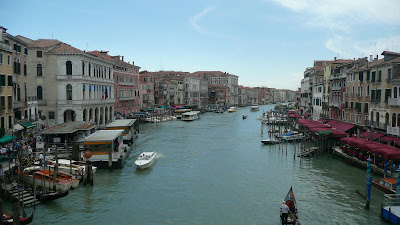 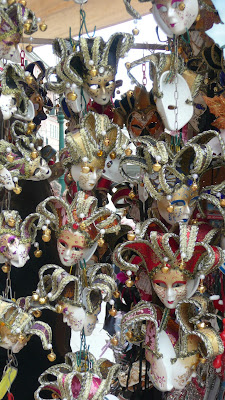 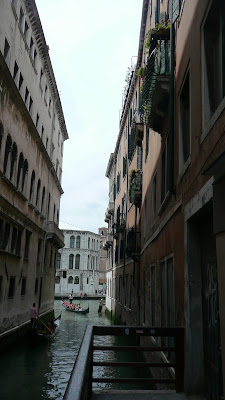 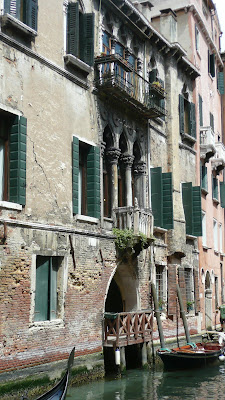 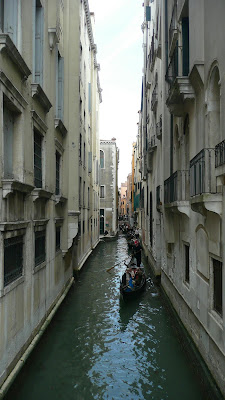 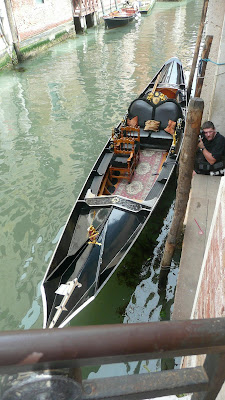 View of Venice from Murano 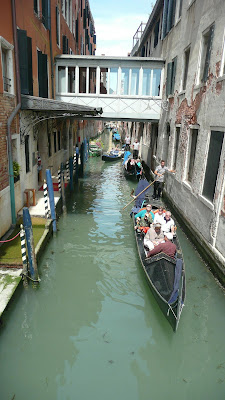 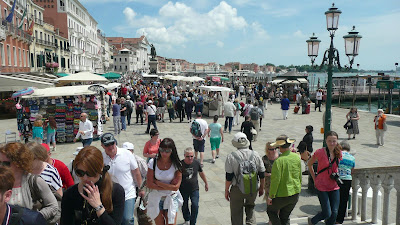 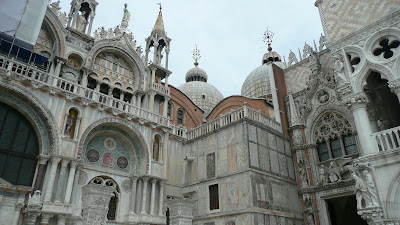