I recently entered the annual GBUK (Glass Beadmakers United Kingdom) competition. The theme for the competition was Sea Life.

I had a couple of ideas in my mind. The first was coral flowers, I had a look online and found a picture of Zoanthid Coral 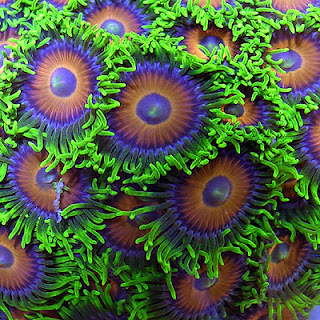 I set about making some zoanthid coral headpins and discs, experimenting with different colours 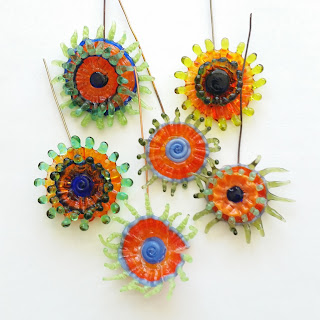 as you can see I had some failures. They were very hard to keep warm in the centre as they were so thin.

I even had a go at making a octopus tentacle - which sadly again broke :-( 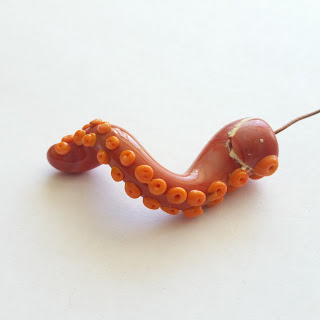 Then I remembered as a child I went to a Sealife Centre with my family whilst on holiday. I remembered being fascinated by a round fish tank in which the fish swam constantly round and round in the same direction.

So I started Googling shoals of fish 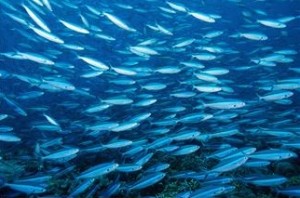 and came across the works of Jo Downs in Devon. She makes the most amazing Shoaling Fish for wall displays. 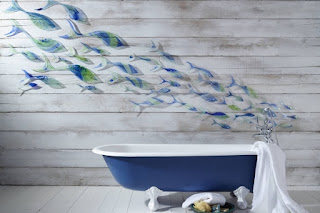 Hence another idea was born, a shoal of fish swimming around the neck.

Now, I had no idea how I was going to create these fish. I knew I wanted them to have be sparkly, consistent in size and I knew they had to be made on a piece of wire so that they could be incorporated into a necklace, other than that - not a clue! So I started having a go at making some fish.... 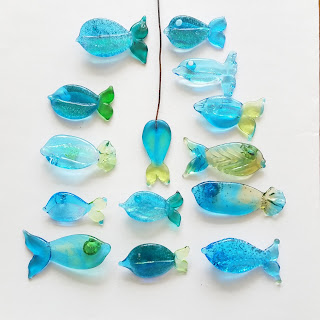 Aren't they hideous? How on earth was I going to get them to look alike?

Then my glassy friend Monique Swinkels came over from The Netherlands for a visit. I met Monique at The Gathering in Houston 2 years ago and we've been friends ever since. I went over to visit her the year before last (blog post here) and back in November last year, she came to visit me. I took her on a tour of the Isle of Wight where I live and visited the glass studios and Tregear Pottery. I'd seen the works of Tregear before but had never been inside their studio which is in Niton. Because it was out of season we were the only visitors and we were very lucky to be treated to a tour. We were also shown their new laser cutter machine which they use to cut out paper to use in their designs. It was the same time as the Great British Pottery Throw Down was being shown on the BBC and they featured one of Tregear' Basins with a Whitebait motif created using these paper cuts. 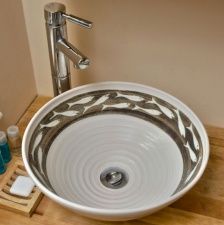 There it was again, that shoal of fish, something was telling me this was what I had to create so I asked Monique (as she has a lot more experience in flame working than me) if she had any ideas on how I could go about creating these fish. I especially wanted this elongated design. When we got back to my studio, she asked me to show how how I went about creating the fish. I showed her one - I must admit it was a bit of a disaster lol! Monique said I need to create the fish using some cane. ?????? I looked blankly at her - I had no idea what she meant.

I knew that last year Monique went over to Richard Collinson's studio to learn how to make paperweights. Colin creates tiny flowers and fruit which are then encased with clear glass to create the paperweight. Have a look at this amazing video to see him at work


Monique wasted no time in creating some gorgeous marbles like this Romantic Rose one. 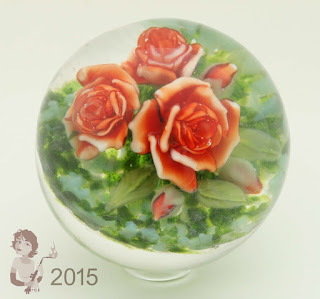 You can find this one and more for sale on her website http://www.moniqueswinkels.nl/

She then showed me how to make a cane and added a sparkly bit of dichro to it. They she went on to make a fish. This is the fish she made..... 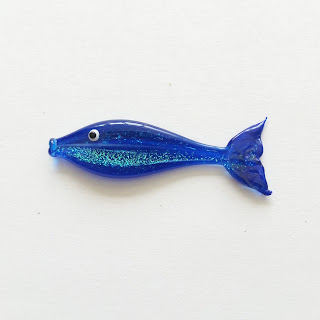 Wow! I was blown away, I had no it could be done like this. I thanked Monique for showing me and when she went home I set about teaching myself what how to make the canes and fish.

I really wanted them to be silver - like the fish are that shoal so I set about doing experimenting with white, silver, clear and grey glass and incorporated some sparkly silver mica flakes and silver foil. 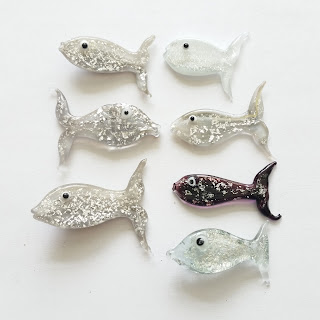 You can see my first attempts at fish aren't brilliant but they are a lot better than the previous ones I had made. In terms of how pretty the necklace would look with the fish in silver I wasn't happy, I didn't think they would show up enough against the skin, so I decided to try them in turquoise shades. Then I decided that having them all the same colour didn't work either as they all blended into each other, so I added blues and greens to the mix. This worked better. I had to experiment with different layers of transparent and opaque glass to get the shades I wanted.


I had trouble with the canes exploding when I put them back in the flame. Luckily I have a Bead Cube kiln which sits right next to me on the bench so I put the cane back in the kiln in between each fish. I also put the fish in the kiln by attaching a punty whilst I made the headpin with a small blob (yes, that is a technical term!) of glass so that I could stick the fish onto it. 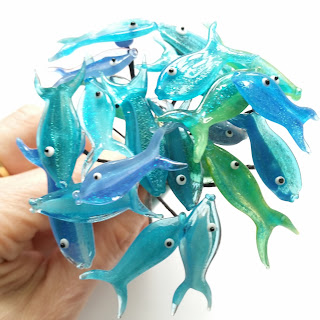 To create the base of the necklace I had some 5mm black rubber tube and had in my mind that I would use. Poke a hole in with a pin and then glue the wire in. 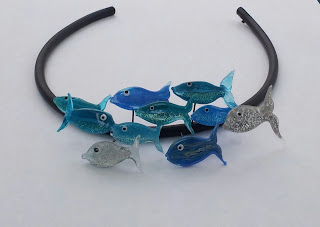 It was hard to get the holes in the right place and get the fish at the heights I wanted so I abandoned this idea and used the same method as I used on my two previous pieces 'Circle of Fire' and 'Snow Queen'. This involves wrapping the wire with florists tape - the same way as a headpiece or tiara would be constructed. This gives me more adjustment. 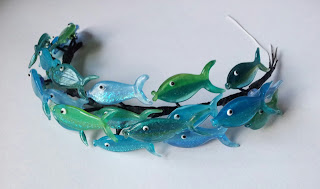 I experimented with using wrapping hand dyed recycled sari silk around the base to get the look of seaweed but I didn't like the look. 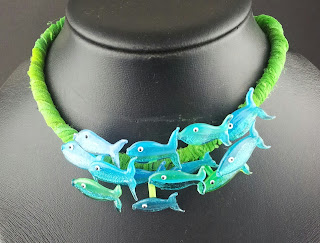 My husband suggested adding some seaweed - he doesn't always come up with the best ideas but I made some anyway just to see what it looked like, but I didn't end up using it. 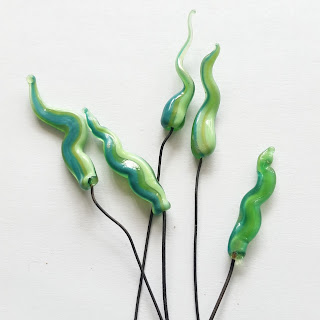 Eventually after making many many fish, I had enough to finish the necklace. It fastens with a magnetic clasp.

I asked Steve Thearle to come round to my house and photograph the necklace, here is a shot of him taking one of the photos. He used some bathroom weighing scales for the dark base as he couldn't find his perspex - it worked! It amazed me that he could take such a fantastic photo with such a simple set-up. 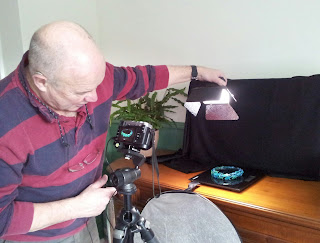 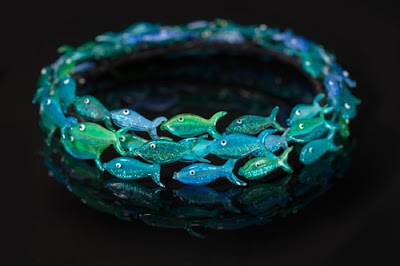 and me modelling it. Steve has got some magic softwear that luckily makes my neck look less wrinkled that it is lol! 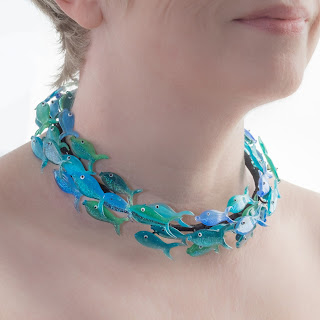 The competition entries had to be in by the end of February, I worked on the piece off and on over the 3 months. Then it was an agonising wait until April - no showing the photos or the necklace (except to a few close friends and family) as it has to stay anonymous until the competition has taken place.

The entries were judged by the visiting glass artists who were teaching and demonstrating at Flame Off - the annual convention of glass beadmakers and flameworkers held at Uttoxeter Racecourse last weekend and also by the attendees.

I am proud to say that my necklace won the Jewellery Category and was voted people's choice. 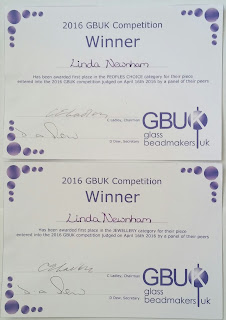 This is my 3rd year of entering and winning the jewellery category of the GBUK competition.

These are my two previous winning entries

Now you can appreciate all the hard work that has gone into making this competition piece.

I hope you like it and thanks for taking the time to read my blog post. Please take the time to comment if just to say that you popped by.