A couple of weeks ago I paid a return visit to Bead Camp run by Marley and Jetze Beers in Nokomis Florida. 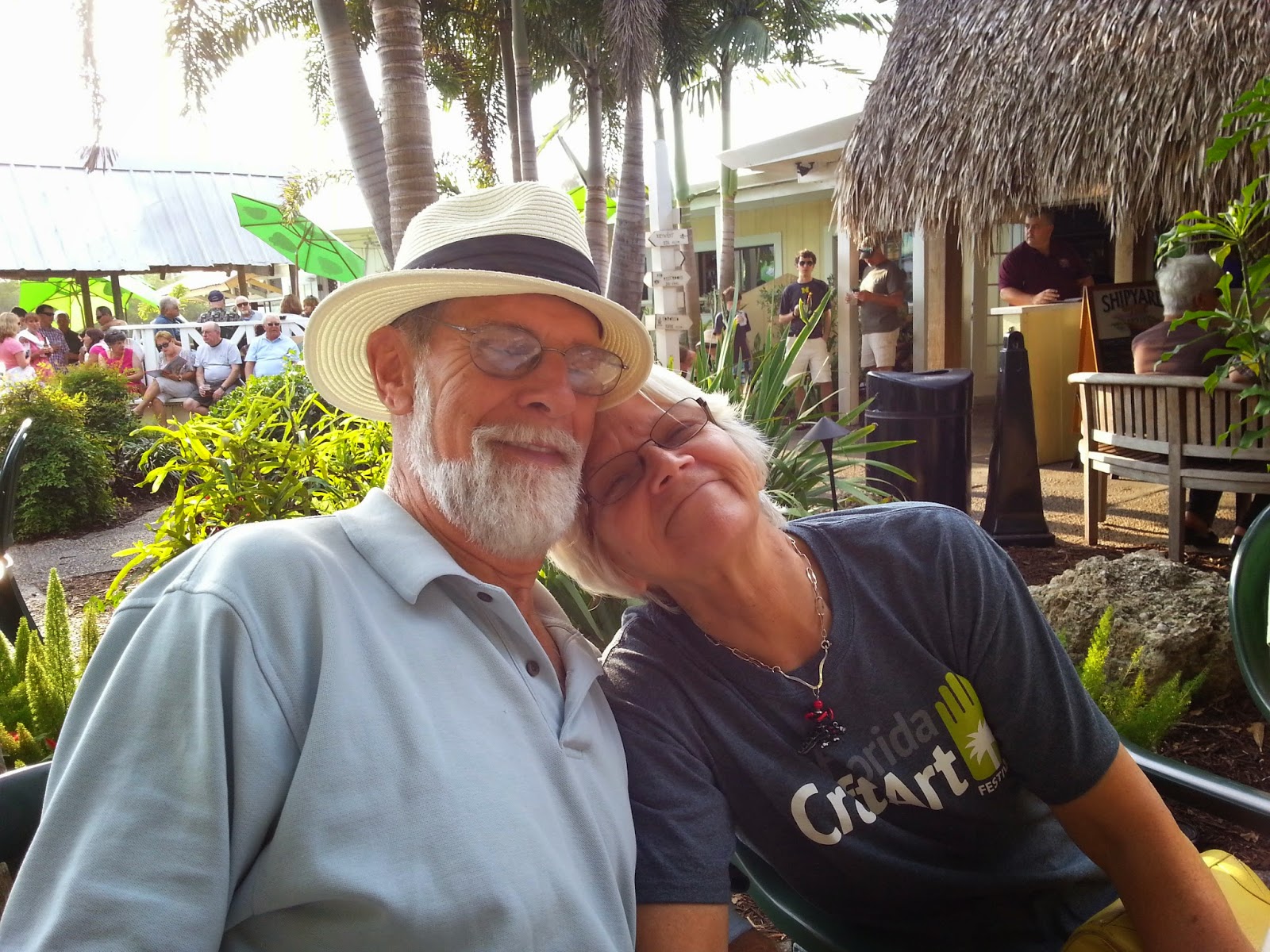 This time the teacher is Sharon Peters. Sharon has been flameworking for 20 years and is known for her quirky sculptural beads, this display of her beads was one of the first things I saw when I arrived

Now most of you know that I don't very often make sculptural beads and in fact when I started bead making I never had any desire to make them. The main reason I wanted to do this course was because Sharon has started using a medium called Epoxy Clay. You can imagine my disappointment when Sharon said that we weren't going to be doing it because the last group got into such a mess with it. Fortunately she changed her mind when I told how interested I was in it and as there were only 5 of us in the group (due to cancellations) it worked out ok.

Each day was started with a novel idea called a Bead Toss. This was done to music, more specifically Beatles music. I didn't realise this but when The Beatles started making records they weren't very long - usually about 3 minutes, which was ideal for this purpose. The idea is each person makes a base bead to 2 songs. When those songs are finished Sharon shouts CHANGE and each person passes the bead they are working on to the person next to them. You then get the next song to do something to that bead and then change and so on until you get your original bead back. 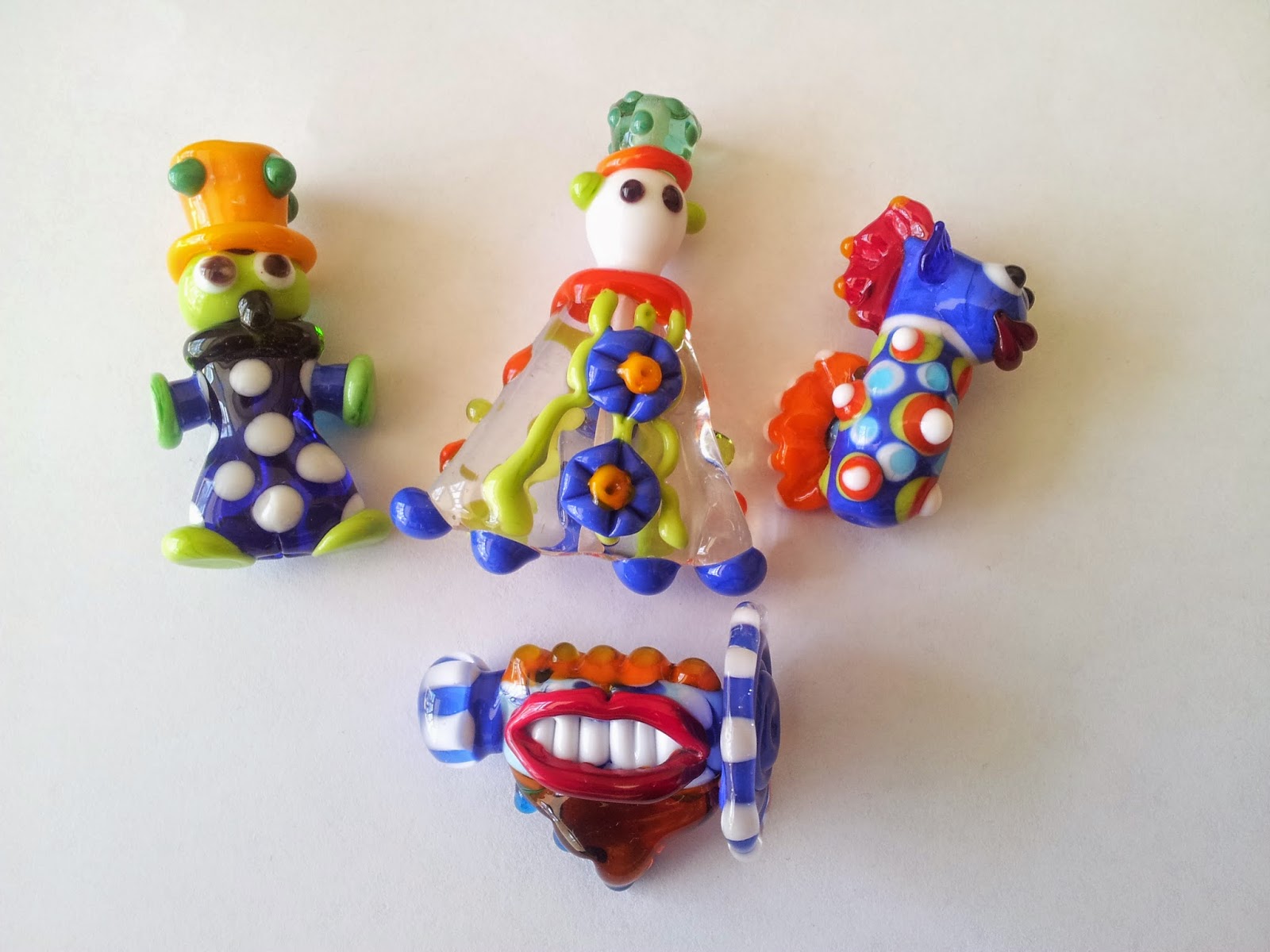 The start of our sculptural experience was fish!

Next up, was a lizard, I was lucky enough to be given Sharon's lizard in the end of class draw, so here is Sharon's and mine.

Sharon then did some demonsrtations of various animals of which we had handouts with designs to use as inspiration. Here are Sharon's Beads 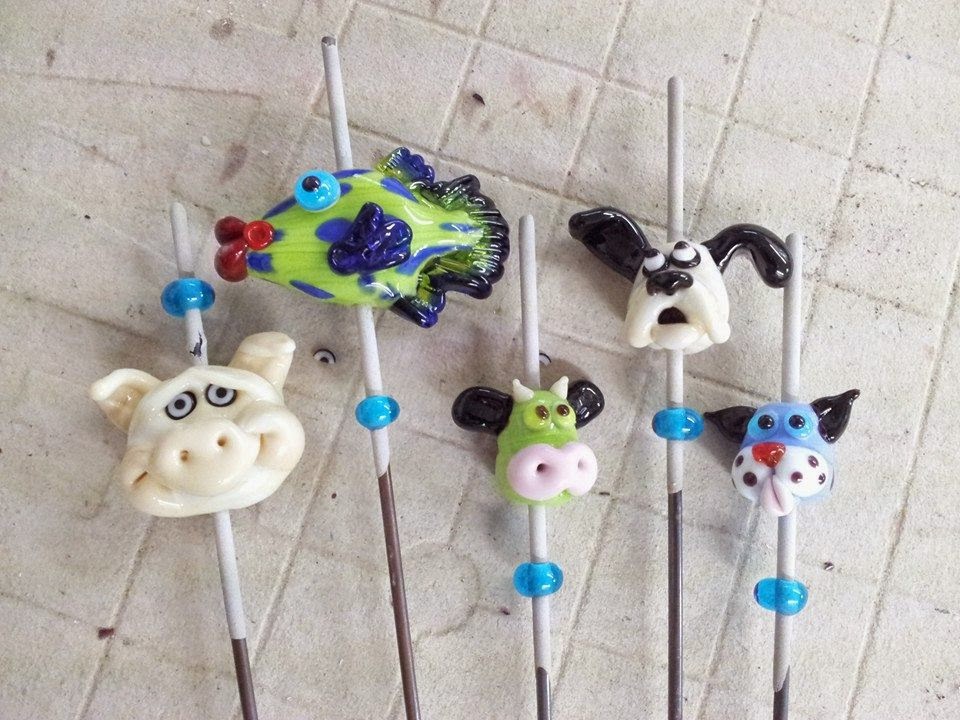 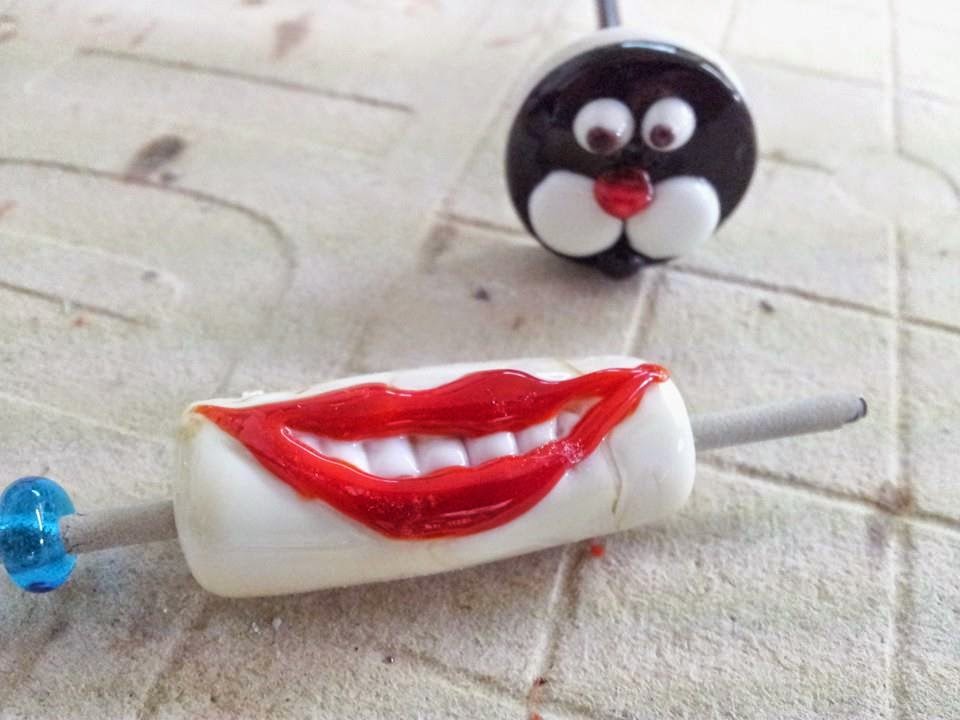 One of the aims that Sharon wanted us to explore whilst we were there was improvisation. The bead on the right ended up being just that. We were supposed to make eyes using murrini cane, (as used in the Sharon's pig bead above) mine didn't quite come out as they should so I just went with the flow and this is what turned out. (Those of you who know how precise I like to be should know how I struggled to let go!) 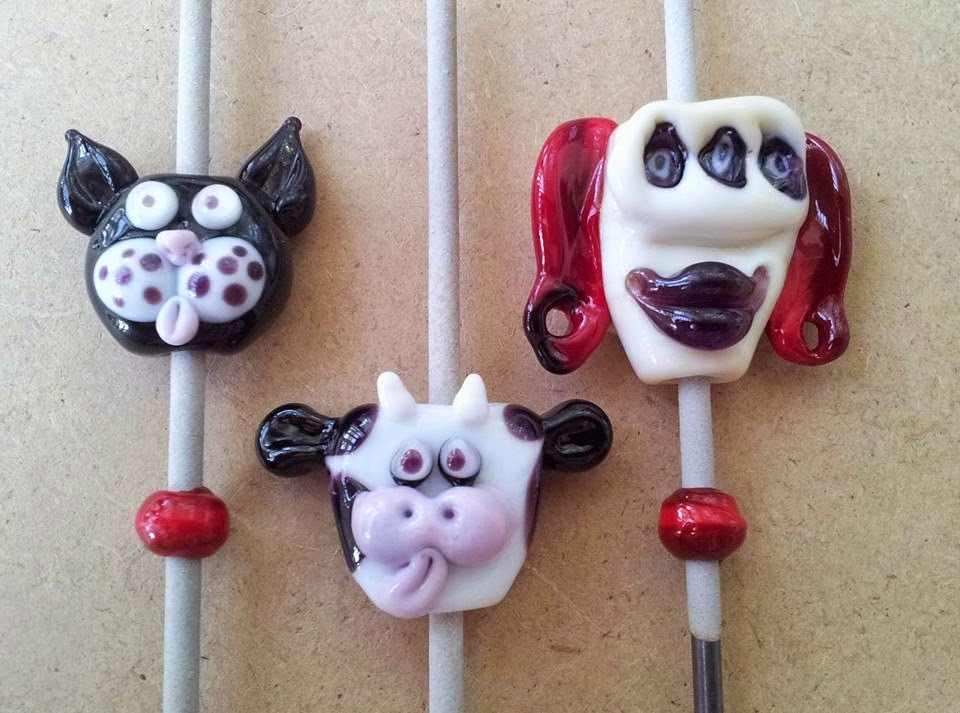 We also had a go at making a cabouchon which we were going to use with the Epoxy Clay later. 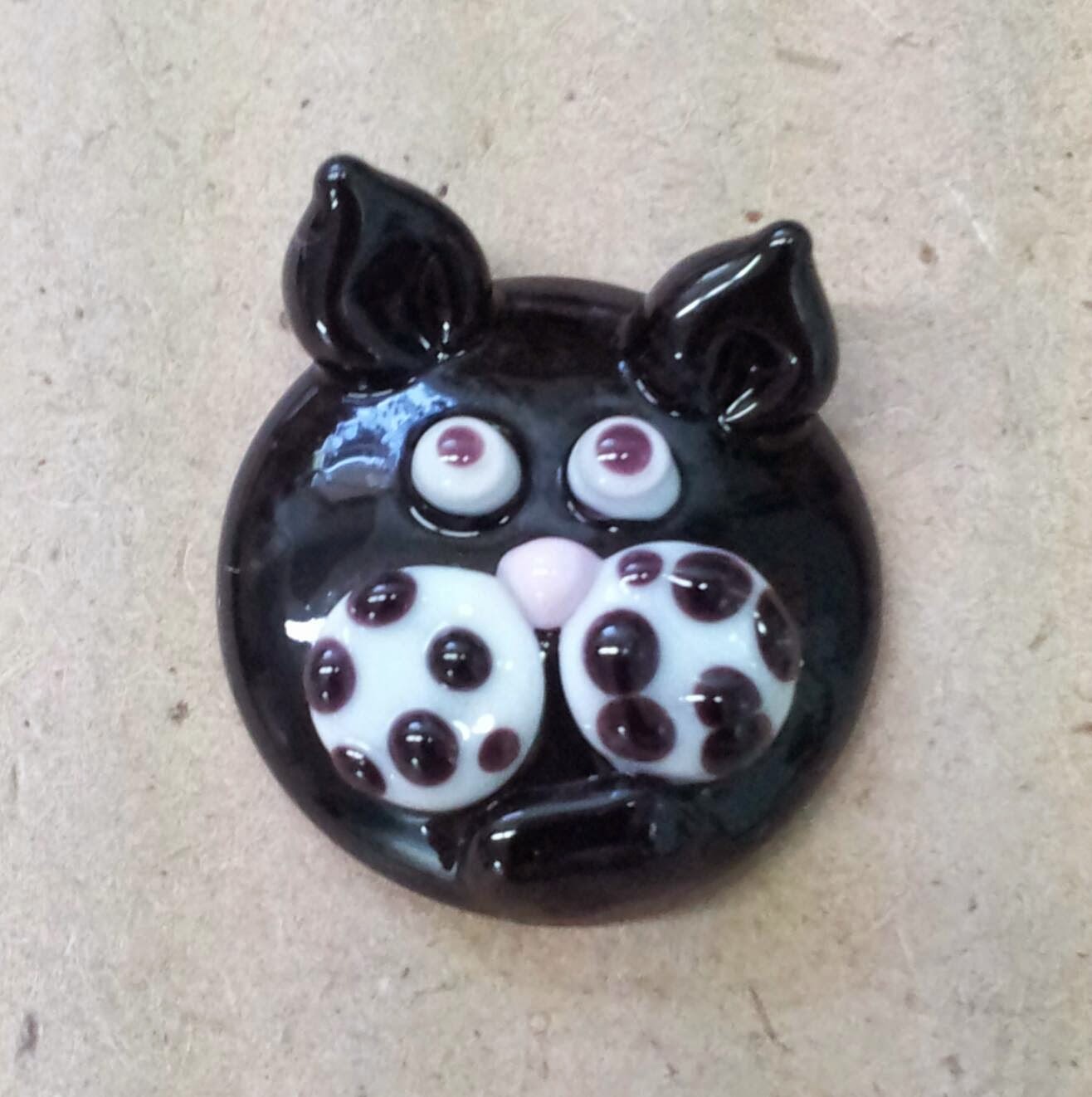 A while ago now I started making some beads for Beads of Courage. I think I did a blog post about it at the time. Anyway I made some butterflies using a tutorial that someone recommended. I didn't realise at the time but the tutorial was written by Sharon.

It wasn't all work although nearly! Sharon had us working very hard even in the evenings!

I did manage to get a few minutes in the sun here and there and spotted this lovely fellow sunning on a lounger. 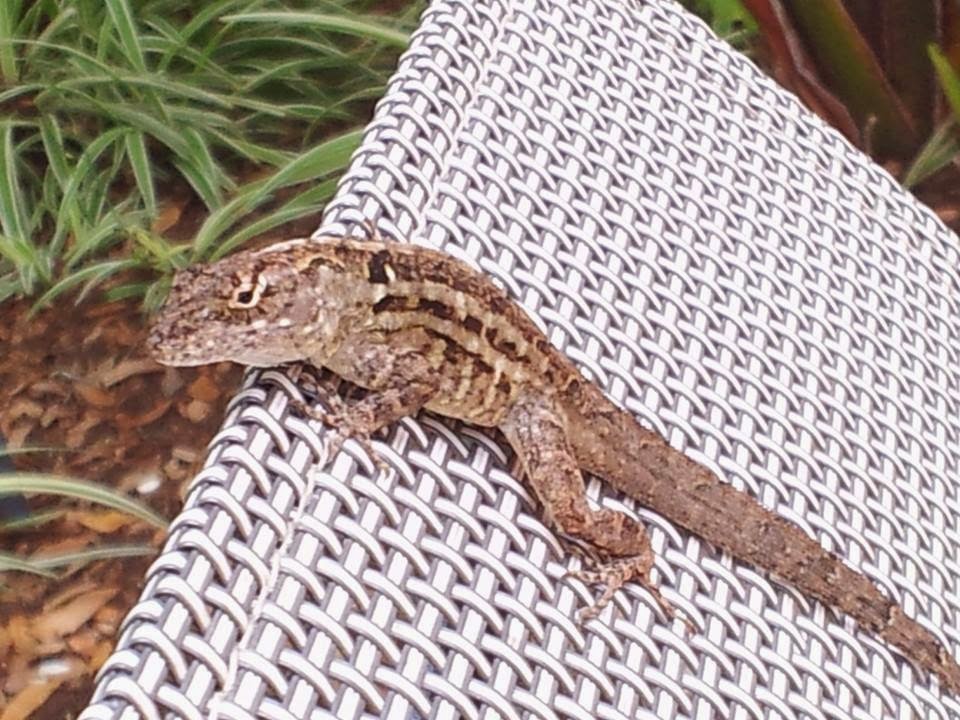 So in the evening we had our first play with Epoxy Clay. I had come prepared with some headpins from home as I had a few ideas of how I wanted to use them.

First up Sharon had a square bezel that I set the cabouchon cat in that I had made into with some seed beads. 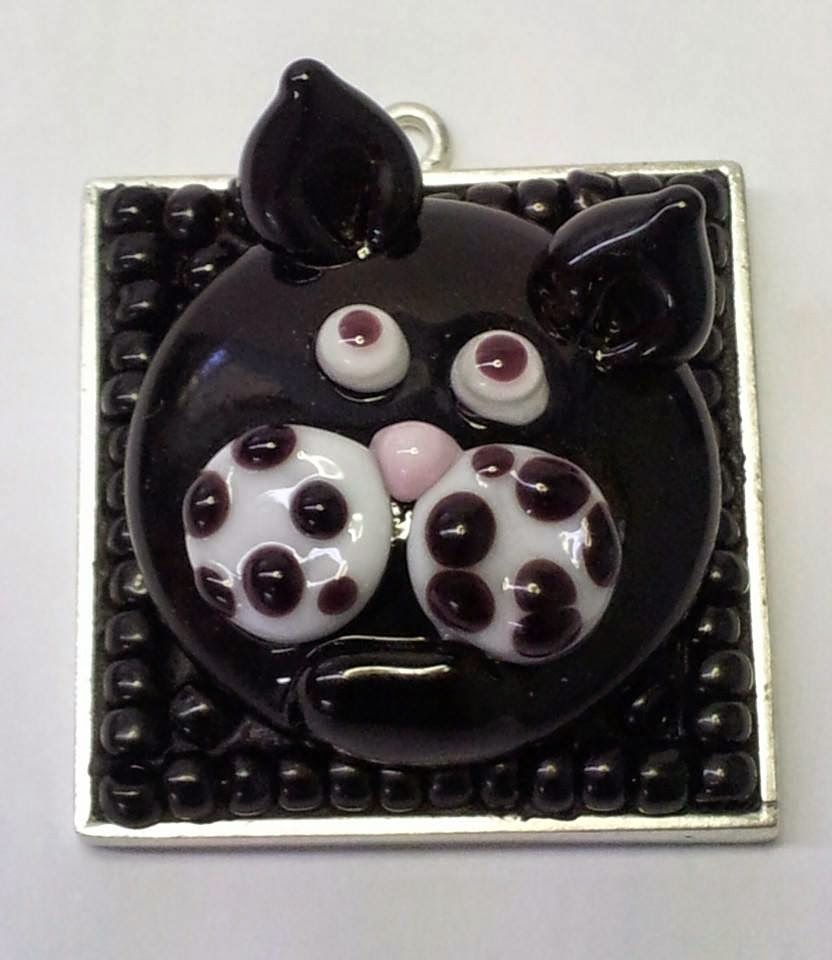 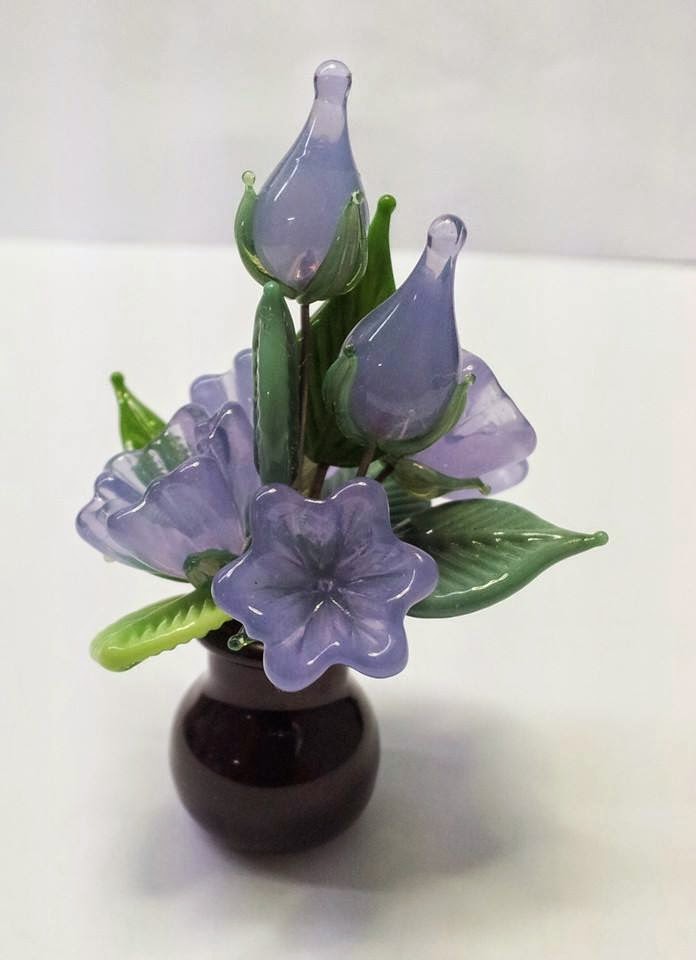 and a couple of brooches 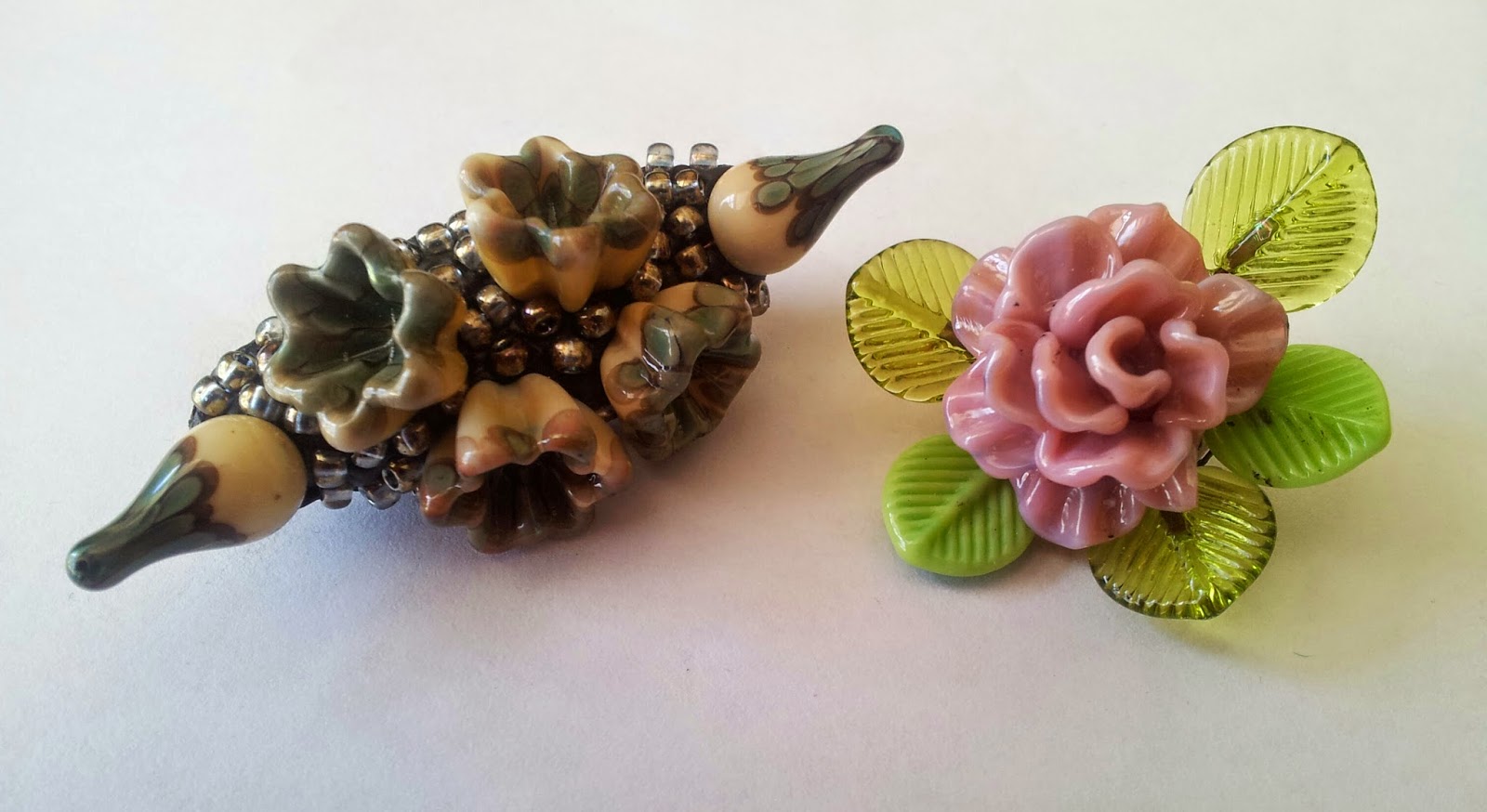 Unfortunately 1 of my little leaves and my flower broke on the way back home :-( 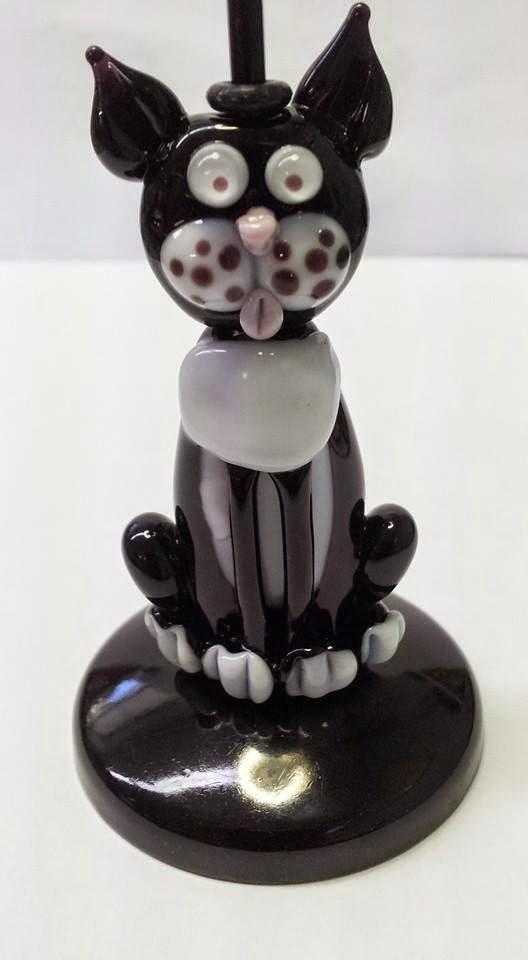 Next up we had a real challenge and a half! Sharon had given us a piece of paper with a list of names on it. We had to select one with our first name and so on. My turned out to be Booger Rhino Tushie. Then she selected 2 toys and told me I had to make a bead with Rhino Tushie, wearing a bikini and with a t-rex mouth?????

I set about doing some scribbles on a piece of paper thinking this was going to be a project over a couple of days only to find out that on top of that we only had 1 and a half hours to do it in!

But I did manage it, so here is Rhino Tushie! 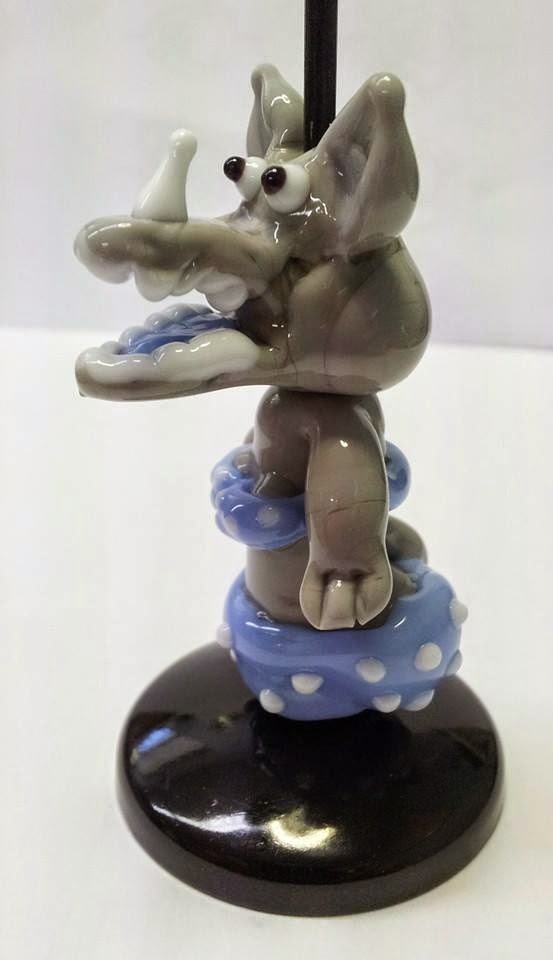 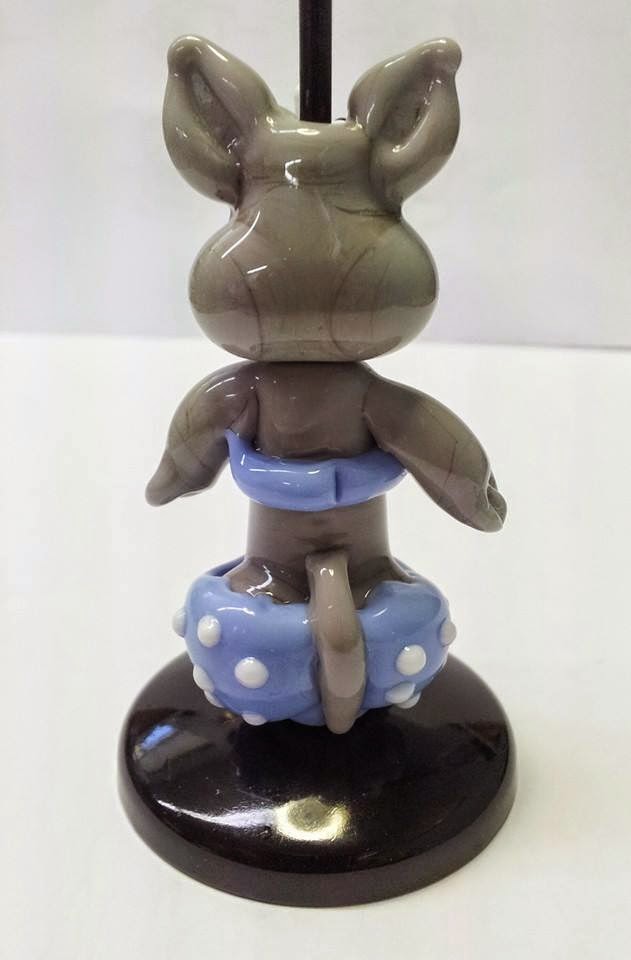 I think I did quite well don't you?

Then I had a go at another cabouchon, this time a cow. 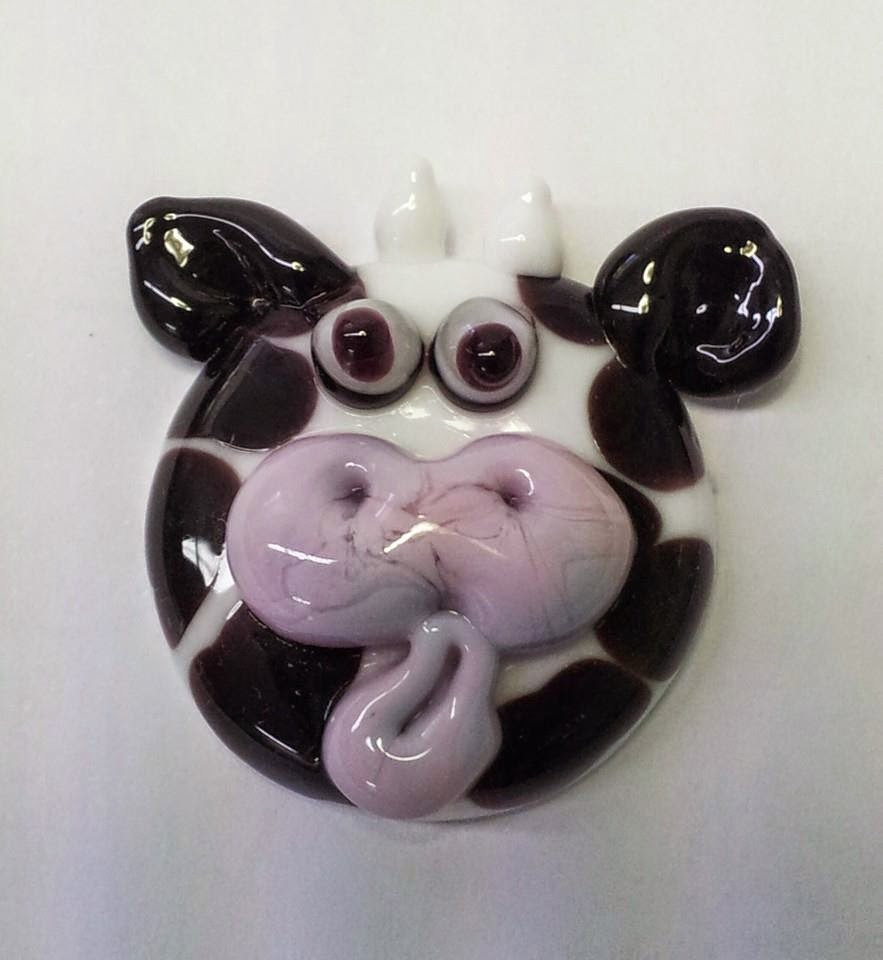 and then I made these 2 fellows which we are going to play with the Epoxy Clay tomorrow night. 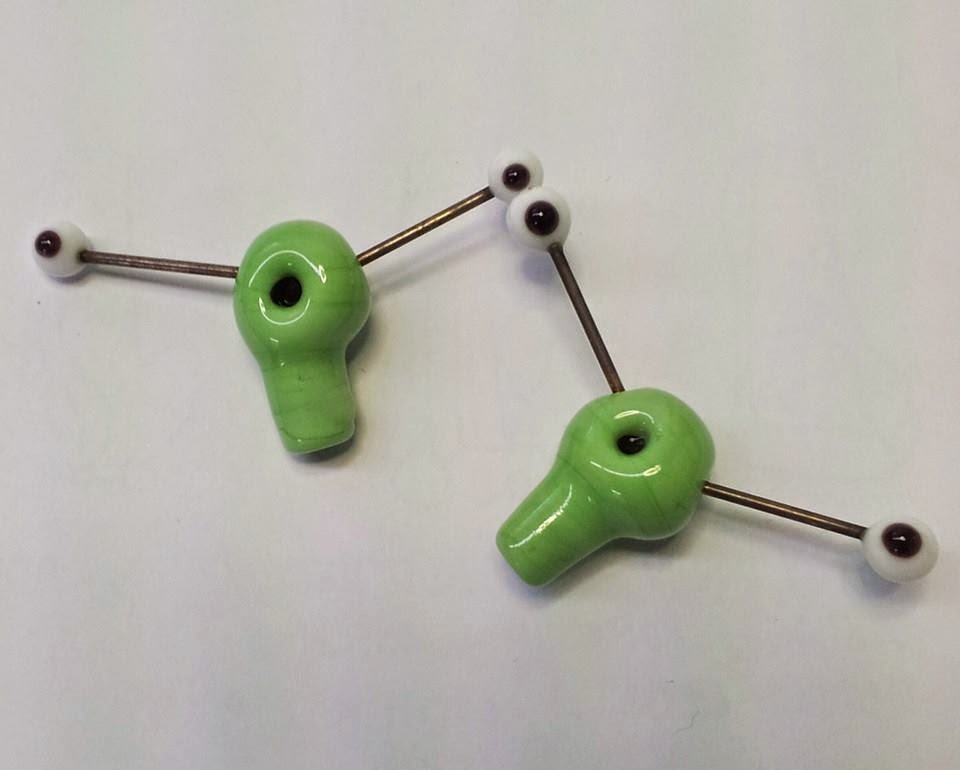 Wednesday night we went to drum circle which I had visited before. It was a bit busier this time as there was no rain forecast. 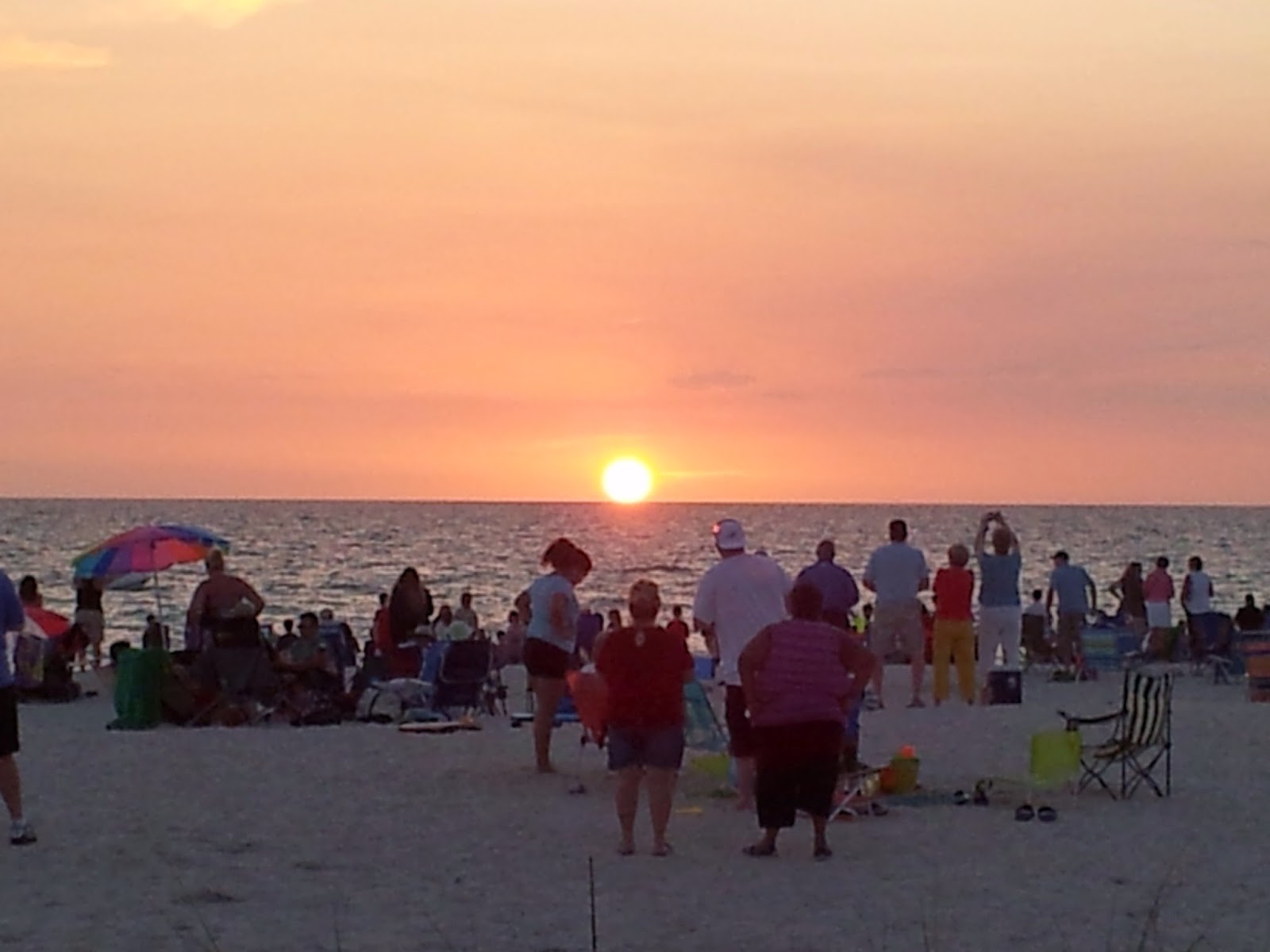 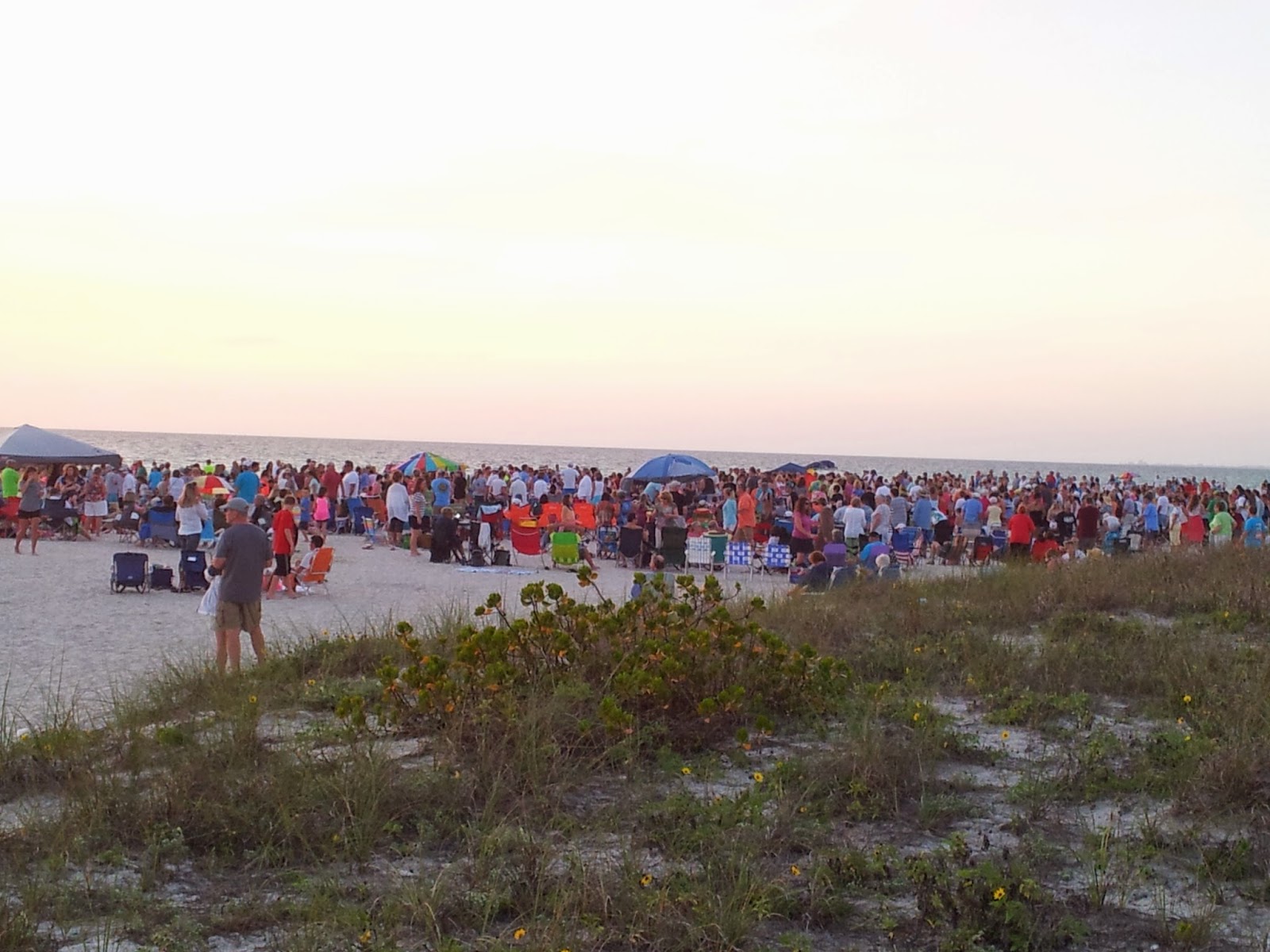 Well this blog post has got a bit large so I am going to continue tomorrow.