Ok, so today was a progression on what we had learned yesterday with a simpler version of this bead being next up. 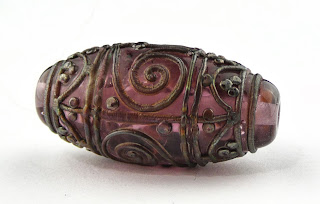 It was very tricky doing spirals in both directions and to have to fill a specific space.

This one is my attempt 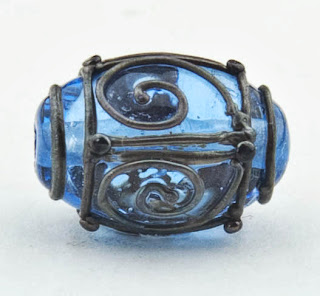 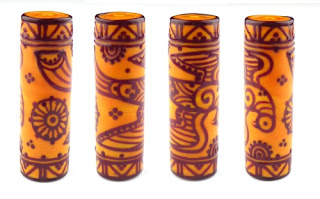 I think this is probably Holly's signature bead, with the bird on. She demonstrated a simpler version before lunch and then after a trip to the chukkie wagon it was our turn. 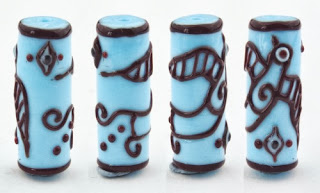 I have to say I don't think my interpretation came out too bad and I really enjoyed my class with Holly.

I had another workshop booked this evening and there wasn't much time between each class so I popped out to Subway and got a chicken salad, had a quick chat with my husband on Oovoo (similar to Skype) and headed back. I have to say I was extremely tired at this point.

My mini workshop was with Jodie Mcdougall. The description of the class was: Sirius System Pendant; learn to make murrini cabouchons using the Sirius Jewellery Component System.

The class was masssively oversubscribed which meant that there weren't enough torches for everyone to use. Debbie and Tori were both on the class with me and weren't impressed by this. To be honest were a bit dissapointed in what was being shown us so that we decided after we had watched the demonstations we were not going to torch but go back to our rooms for a rest.

The first official day of THE GATHERING coming next.