Sunday
I didn't sleep very well, I rarely do when I am away and was awake intermittently during the night. The time difference was only 5 hours but I woke up at my usual time of 8am being 3am in New York. I managed to go back to sleep for a while but ended up reading until it was time to get up for breakfast at 7am by which time I was starving.

The room was very nice, and the bed was huge. The view out of the window is mainly carpark, but to the right is the Genesee River which leads up to Lake Ontario. As you can see in the picture there are a couple of bridges and a weir.

Breakfast
I decided to eat breakfast in the hotel as I wasn't sure what places there were to eat nearby. I had eggs, bacon and waffles with maple syrup, yoghurt and fruit and a pastry along with a cup of tea. Very tasty. When the bill came there was a place for a tip and I was a bit unsure what to do, so I went over and asked a waitress and she thought I was so sweet to ask. She said that she usually tips between 15 and 20% and that the easiest way to work this out was to double the sales tax. So with taxes and tip breakfast came to $20 which is about £15. Not cheap but not too bad for an all you can eat buffet breakfast.
My next task was to head out of the hotel and find some bottled water (my husband doesn't want me to drink the water here as they put flouride in it). Reception told me that there was a family dollar store across the road. What she didn't tell me was that it didn't open until 10am and it was only 8.30am. So I went for a walk in search of an ATM as I wanted to withdraw some more money. I found one and surprise surprise it wouldn't let me have any. I was started to get a bit worried by this point. It's not a particularly nice area, the hotel is in the CBD (Central business district), in fact I don't think that Rochester is a particularly nice city apart from the river and canal which are is redeeming feature.
There was hardly anyone about and the people that were there were black. Now don't get me wrong, I am not racist but the island where I live it predominantly white so it takes a bit of getting used to the fact you are the only white person around. I got asked for change a couple of times which made me feel a little uncomfortable.
I headed back to the hotel and headed over to the conference centre to see if I could see anyone as I was sure someone must be setting up ready in time for the workshops but I couldn't see a soul. Feeling a little bit lost and wondering if I had done the right thing in making the trip. By this time it was 10am and so I headed over to the Family Dollar store and bought some water.
Once I was back in my room, I had the idea of emailing Kendra who had answered all my questions before I left. I sent her an email and then it occurred to me that I could go down to reception and ask if they would let me have her room number. They wouldn't but they did call up to the room for me. Kendra wasn't there but Angie Rainey the president of the ISGB was and I asked her if we could meet up. She explained that the conference hadn't started yet, so I said that I would be happy to help out any way I could with setting up. It turns out they were meeting at 2pm in the lobby to go and stuff bags, so I arranged to meet up with her then.
I thought I had better get some lunch and had spotted a Subway nearby so went and got a sandwich and sat down in a nearby little park to eat it.

I got a lovely welcoming hug from Kendra who told me how pleased she was that I had come and then we set off to the conference centre. I now knew why I couldn't spot anyone earlier and they were hidden behind a locked door!

Bag stuffing
A small team of people were already there, putting beads onto the bags that each person would receive when they registered. Full of goodies, a mandrel, some samples of glass, a piece of bronze clay, sample of Terra Cast and lots of magazines and catalogues. It was my job to help stuff the bags with these goodies in the correct order. No mean task with nearly 300 of them to do.

Whilst doing this I got chatting with the other helpers. One of them was Debbie Smith of Fun Funky Findings. Debbie took me under her wing, when I mentioned that I had hoped to go to the Corning Museum of Glass but that I couldn't go because it clashed with my class with Holly Cooper.
Debbie said that she and her friend Tori who hadn't arrived yet were going to Corning tomorrow and would I like to go with them. Well of course I jumped at the chance and said yes please.
As the afternoon wore on I started to feel tired, it was extremely hot in the room as the air conditioning hadn't been turned on for long. Once all the bags were packed I headed back to my room but arranged to meet up with Debbie for a meal later. She suggested Dinosaur BBQ so that's where we went.
﻿﻿﻿
﻿﻿﻿﻿﻿﻿﻿﻿﻿
﻿
﻿﻿﻿﻿﻿﻿﻿﻿﻿﻿ 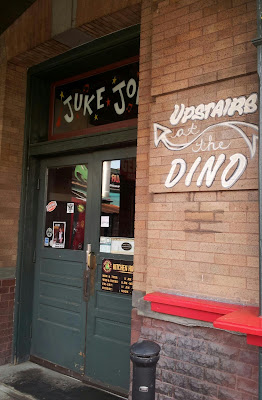 ﻿
﻿
﻿﻿﻿
﻿
﻿﻿﻿﻿﻿The menu looked like it was in a foreign language to me so I had to ask Debbie for some help and settled on a plate of ribs with fries (chips) slaw (coleslaw) and corn bread.
﻿ 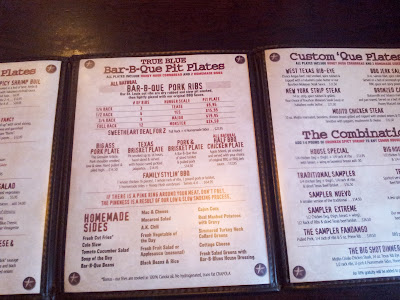 I had a lovely time chatting to Debbie.