The Beading Gem's Journal is having a giveaway for a Modahaus TS400 Photo Studio Giveaway.
Modahaus is a UK company and I saw the smaller version of this when I had my first lampwork class with Becky Fairclough. So pop along and put your name down. But if you shouldn't be lucky enough to win one read on.....

During the summer last year I was taking photos of my beads in my conservatory and getting reflections of the glass in my beads which I didn't like. So I made myself a little light tent along the lines of the Modahaus one. I blogged about it back in May of last year http://www.earth-shine.co.uk/2012/05/homemade-light-box.html. 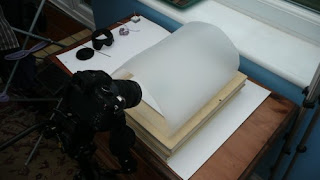 I used it a few times but found it a bit limiting as I take a lot of my shots overhead and so put it to one side and didn't use it anymore. So when I read Beading Gem's Journal about the Modahaus I had another look. They have since introduced something called a steady stand and you know when a little light bulb goes off in your head, well that's what happened to me. So simple, just cut a little hole in the tent and bingo, overhead shots. Why I didn't think of this before I have no idea.

So here it is with the hole cut out of the top which is big enough for my camera lense to fit though. 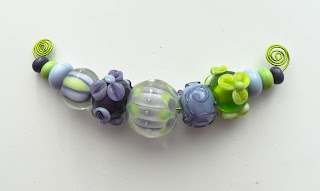 This is the shot I took through the hole, just daylight and this one was taken through the front.

There's a little bit of a reflection from the window on the photograph paper that I used as a background but it's not too bad. A little bit of tidying up in Corel Photopaint and voila

Just perfect for putting on Etsy which is what I'm off to do now.