When I first saw the Melanie Moertel workshop advertised on the Mango Beads website I hadn't heard of her before, so I Googled her beads and can't say that they were of a style that appealed to me that much.
(You can see her beads by looking at her Flickr album here). But when the description of the workshop mentioned the magic words 'stringer application' I decided this was a workshop for me.

Having done a workshop at Mango Beads in November (see my blog post on Unikal Glas Design),  I was lucky enough to get a reservation at the Crossways B&B where I stayed previously which is so conveniently located in the same road as the studio and only 10 mins walk to the town of Barnstaple.

As I had to drive up on the Friday I decided to make the most of my trip to the mainland and took a friend with me to do some shopping at Ikea, boy is it so easy to waste hours there! I managed to grab a real bargain though. This metal chest of drawers which will be perfect for keeping some of my jewellery making components. 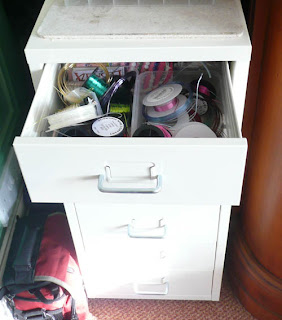 I dropped my friend back at the ferry and continued on my way to Barnstaple. I had a reasonably good drive and arrived in plenty of time to go to Weatherspoons for dinner. Would like to say I got a good nights sleep but unfortunately I rarely sleep well when I am away. Anyway I was awake in plenty of time to pop into town and pick up a sandwich for lunch and get to the studio at 10am.

It was lovely to see Manda and David again and there was a full house with 10 students, a few of whom I had met before but not got to know well. 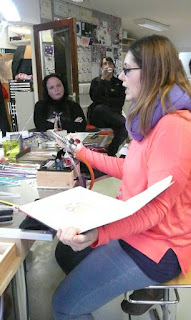 Melanie started the workshop by telling us a little bit about herself (she's from Germany) and going through her favourite tools, she then asked all the students to introduce themselves and tell her about their lampworking experience so that she could gauge how much we knew.

She has taught before and explained that she used to ask her students what they wanted to get out of her class but as the answer was always the same - stringer control - she stopped asking.

So to start the demonstration Melanie showed us how to pull three different size stringers. Thick, medium and hairfine. She also explained to us what the best colours are for stringers and how to make a test bead for glass you weren't sure of.

The next demo was to make an ugly bead. Sounds odd but the idea was to practice applying the stringer without worrying about what the bead looks like.

After each demo was our turn to put into practice what we had been shown. Not always as easy as it looks I can assure you. 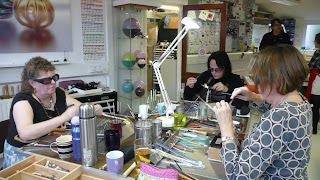 This took us up to lunchtime and then after lunch Melanie demoed her island bead with satellite stringer decoration. Then it was our turn.

These are the beads I made using the techniques we had been shown so far. I can't say that I am happy with them as they are just practice beads and I have a long way to go. 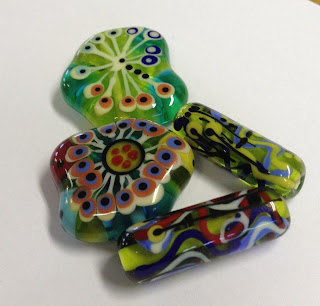 Last job of the day was to make some murrini to be used the next day. 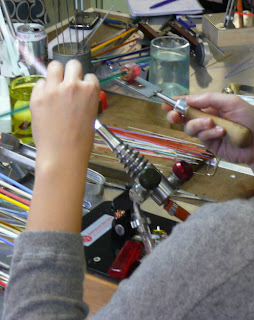 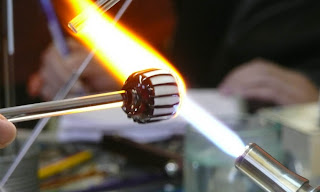 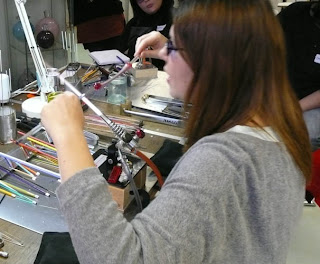 I made a stupid mistake of putting tourquoise stringer onto an ivory base. You will be able to see what they came out like in my next post.


Here are some photo's of beads she brought with her to sell. 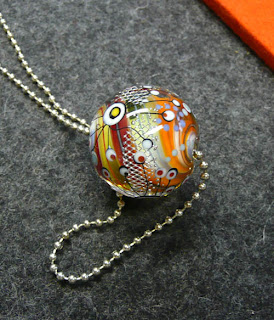 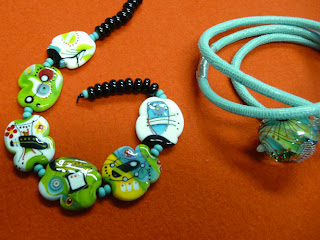