There's a reason why I'm posting the last two torching sessions together - I accidentally wiped the photos I took of the first one - doh! So I don't have the pic of them on the mandrels, never mind not the end of the world.

I've been working on this necklace using some lentils that I made ages ago. I felt that it needed a focal pint so I made this lentil and heart. They turned out to be a bit big so I will be adding them to my Etsy store in the near future. Also, even though I used the same colour glass CIM Plum and Effetre Amethyst, they look darker than the lentils I had made before. I can only assume it is because it is a larger ammount of glass. 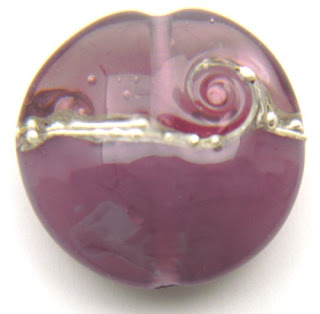 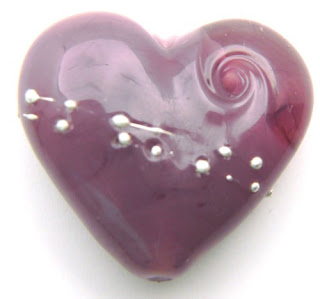 This is the necklace. I made another smaller heart in my second beading session and I think it looks much better. Unfortuanately I seem to be making all the same style necklaces at the moment. 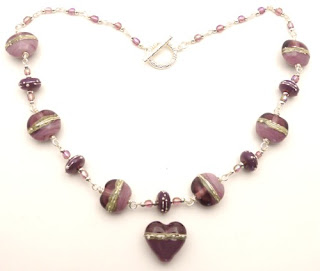 Believe it or not I am still trying to make enough hollows with the 3mm holes for my sister. I think I am finally there. I am still having some failures, so rather than waste them, I have been using them to practice my stringer control. I quite like them and will make some more.

I finally got round to trying a recipe tutorial I've had for a while, as well as the frit I bought to go with it.

The tutorial is this one 75 Lampwork bead recipes by Gems in Bloom I won't tell you the recipes used in these beads, you'll have to buy the tutorial and find out for yourself!

They are scrummy though and I went on to make enough beads to make 2 sets and some tester spacer beads to match. 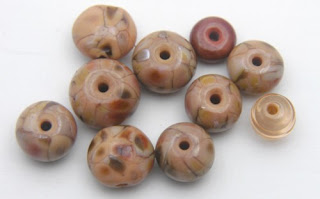 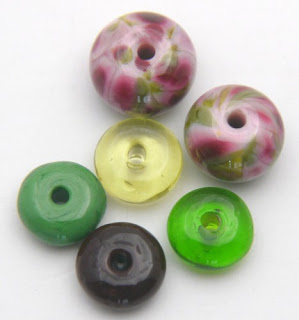 I decided to break up this set to make some jewellery. 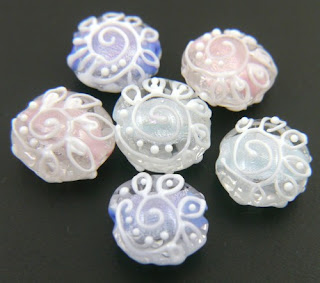 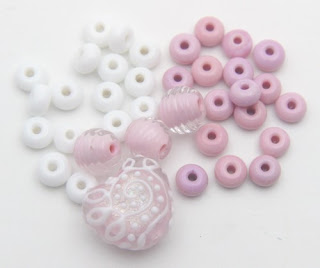 These are CIM Peace and Effetre Baby Pink.

I decided to do an experiment. I am rapidly running out of room in my SC2 kiln. The bead door is the most stupid thing ever designed and waste's so much space, so I decided to see if I could make spacer beads and batch anneal them later. I figured that as the beads are made by making the first bead and then not going back to it, by the time I have got to the end of the mandrel the first bead would be cold anyway.

I made one set and put them in the slow cooker with the cooling bubbles and the second set I just left to cool. No cracks! I even cleaned them without breaking. So, I think this what I will be doing from now on. Batch annealing all my spacers. 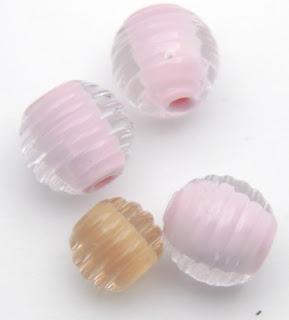 I made these beads with a view to etching them, will post another picture when I've done them.

Here is the update photo of the beads etched. 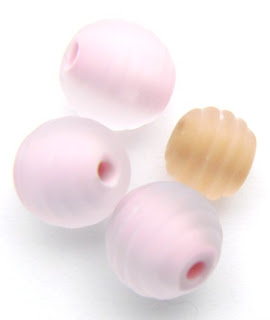 I like them like this, they have a frosted look to them with a hint of colour.
A while back I bought some components from Kristi Bowman. She makes some lovely copper components and writes a great blog.

I've had in my head for a while that I needed to make some small lentils to go with them so when I made the fritty beads I thought the colours would go lovely with the copper. 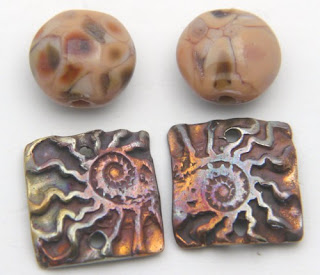 Unfortunately I think they are a bit small and the one on the right doesn't have as much colour as the one on the left. Another go called for I think.

That's all for now.