Swap beads and Beads of Courage for Flame Off

I'm not sure on the etiquette of posting pictures that are going to be swapped at Flame Off, but, if I don't write this us now I won't be able to do it until next Monday and I might forget what glass I used. I am a few years into my 40's and my memory is just starting to get a bit erratic which I find extremely irritating. I have started taking Ginko Biloba in the hope that it will help.

So Flame Off, for those of you who don't know, is a huge get together of like minded glassy people organised by Tuffnells Glass probably the UK's largest glass supplier for the lampwork trade.

This will be my first year and it sounds like it will be a bit of an experience. Apparentely there are going to be 40 torches set up which we can have a play at. Demonstrations and lots of glass and bead goodies to buy. can't wait.

The Frit Happens Forum which I frequent is organising a bead swap. Basically when you arrive you put a bead that you have made in the allotted box and at the end of the day you pick one out. You never know what you might end up with and it's great fun.

So last night I set about making a some beads that might be suitable for the bead swap. Hopefully someone will like what I have come up with.

I had another browse through the Gems in bloom recipes by Jacqueline Parkes and came up with these. 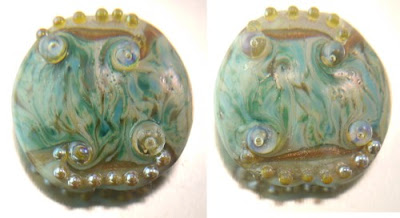 I thought the recipe called for CIM Dirty Martini which is described by CIM as an opaque soft green, I didn't have any the nearest I have half a rod of Effetre Cool Green Tea 680 which is absolutely scrummy. (I haven't seen any of this for sale on the Tuffnells Site so I don't know if it is still available). Upon re-reading the recipe it actually called for CIM Canyone De Chelly, oh well, never mind I love the green.

So the base of the bead is Effetre Cool Green Tea 680. Wrapped and burnished in silver leaft then rolled in Cheeky Cherubs frit Marina (I've just looked but there doesn't appear to be any for sale at the moment.). I didn't have the frit shown in the recipe so used one in similar colours.

The frit was then melted in and then raked from side to side as shown in this tutorial http://beadgoodies.com/pages/rakedbeadtutorial.php.

Goldstone ribbon was applied to each end which was then melted in. Spot heated and twisted with a stringer. Dots of Double Helix Helios were applied and then poked and encased in clear so that little bubbles formed. Extra dots of Helios added to the top and bottom and reduced. 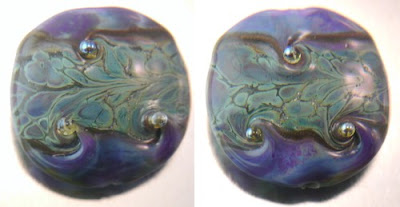 This is another variation of a Gems in Bloom recipe.

The base is Kugler Silver Brown (instead of CIM Canyon de Chelly) rolled in Reichenback Multi-dark frit. There were some lovely purples present when I melted this frit and I was afraid that I had lost them through to overheating. This is a size 1 frit which takes a long time to melt in. I was so pleased when I pulled it out of the kiln and some of the purples were still present.

I then applied Reichenbach Purple Rose to the ends and as in the above bead applied goldstone and Helios dots.

I love the colours in this bead and will be trying this combination again.

I got a bit carried away with this one. It is basically the same as the bead above but with the ends left in the Silver Brown. I applied some silver murrini which a friend of mine made. Each murrini is exactly the same but has been applied differently to get different effects. I spent so long working on this bead that the colour went out of the goldstone so I re-applied it, unfortunately the bead wasn't quite hot enough in one place and the stringer pinged off in the kiln. This one won't be going to everyone but it was an interesting learning curve.

So the first two beads will be my bead swap beads and I hope that whoever receives them will like them as much as I do. Many apolgoes for the quality of the photos, still getting to grips with my camera. 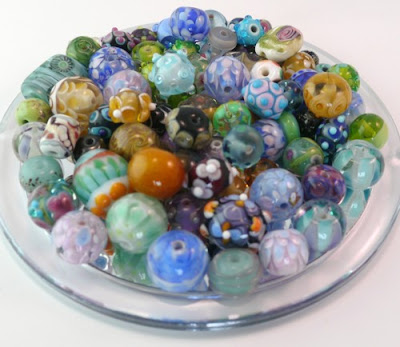 As I have been steadily practicing making beads I have been getting quite a collection. A representative of Beads of Courage is going to be at the Flame Off so to save some postage I will be taking them along. There's 60 beads altogether. It's nice to know they will be going to a good home.

I seem to have got the focal point all wrong in this picture. back to the camera manual I think.

For those of you who are going to Flame Off - hope to see you there.