You may or may not have noticed that I didn't post anything last week. This was due to a very uninspiring week of bead making. The weathers been improving which means that it's time to get the allotment ready for planting and this is cutting into my bead making time.

I was in two minds as to whether post the rubbish I made at all but this is supposed to be my diary so should include the bad as well as the good days bead making.

One of the things I had a go at was the Ether tutorial by Kim Neely  (it's the 5th one down the page). 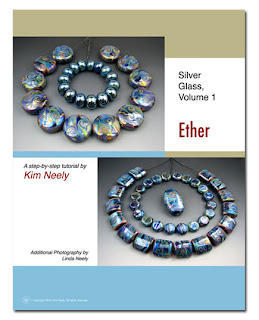 There are lots of pictures of peoples attempts on the Lampwork Etc. forum. You will have to join to be able to see them though. 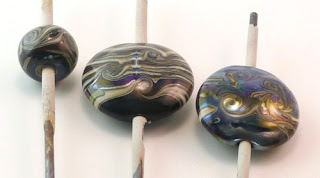 As you can see my first two attempts weren't very successful. The third one was a bit better but I found that I had to really soak the bead in the reducing flame to really get any colour to come out. Was good practice for my new lentil press. More practice needed. 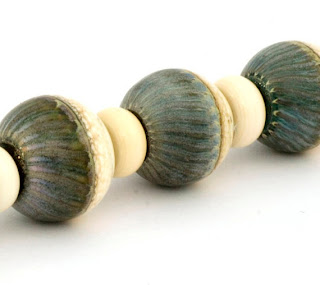 I bought these gorgeous glass beads from Galloway Beads on Etsy
I was really intrigued as to how they were made and emailed Elaine and cheekily asked if she would mind sharing. Unfortunately she is not sure she can repeat them, which if this is the case would be such a shame.
I really have no idea but thought I might be able to re-creat something similar using enameled stringer. 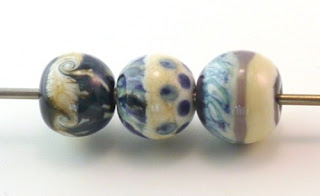 As you can see, I failed miserably but I did create some interesting effects which might be worth some more exploration.

Following my post on Madelaine Bunyans great idea for a necklace/bracelet, I have fallen in love with Amy Kuczewski  beads. The ones I like are called Jaipur or Bollywood. Unfortunately the minute they are offered on sale they are snapped up. This is a link to her Etsy store http://www.etsy.com/shop/flamekeeper.

So as I am unlikely to ever buy some of her beads I decided (with my limited expertise) to have a go myself.  Obviously I need a lot more practice but I enjoyed making them.

They are so over the top, don't you think?