We hunted out two bead shops that I had looked up on the internet before we went away. Good job I did as 1 was a little out of the way.

The first one was Bijoux Beads, we found them to be a bit posh and very expensive. I didn't really appreciate the notice about not being able to take pictures either.

The other was Shiney Rocks. They had several necklaces for sale which had lovely colour combinations and really 'talked' to me. I thought that they would be relatively simple to make and purchased one so that I wouldn't forget what it was like. How many times have you seen something you'd like to make and then forgotten about it later?

The necklace was made using 4 strands of coloured wire - which they sell. As they do jewellery classes I was sure they wouldn't mind my using their idea especially if I bought the materials from them, so I asked which gauge wire was used and purchased several colours.

Here is a necklace and earrings I made using this design. 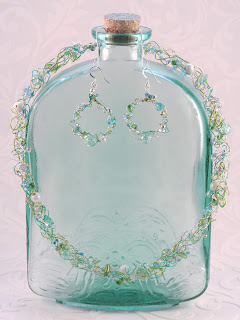 I also purchased a Fimo Soft Clay Kit as I fancy having a go at this.